- shape: between the Gibson Explorers 1958 and 1976, but with headstock like a "banana".
- construction: set neck (with a step where the neck joins the body, similar to a Gibson explorer
- neck: mahogany
- body: mahogany
- fingerboard: rosewood 22 frets XJ with "middle fingers" inlays, 24.75" scale (628mm)
- electronics: active EMG 81 (bridge) / 81 (neck), 1 Volume, 1 Tone, Toggle 3 way selector
- hardware: Gotoh tuners, ABR-1 Tune-O-Matic bridge and stopbar, Black Hardware
- logos and serials:
-- front of headstock: "ESP Custom" light grey/gold glittered logo for black guitars, black/gold glittered for white guitars
-- back of headstock: "????????" (8 digits) serial number stamped in white or black (NO "ESP Custom Guitars" circle logo)
colors and other features: olympic white
- notes: EET FUK Sticker made by James
This is the very first ESP owned by James in 1987. In the late 1987 ESP made a few explorer guitars for James Hetfield of Metallica without the pickguard like Gibson, but with almost the same shape. James sign a contract with ESP and this model was in the collection of the ESP. These guitars were originally known as the EX, but later became known as MX-220II.
The toggle switches on this first James MX-220 explorers were closer to the volume knob than later explorers, and had a unique two screw truss rod cover that mounted flush with the nut.
The input jacks are round and recessed into the body in models from 1987 to 1989, from 1990 there's a plate held by four screws, the truss rod cover changed to a 2 screw Gibson style which was no longer flush with the nut but everything else stayed the same including the step in the neck.
The sticker “eet fuk” in the upper corner is written by james, describes his favorite activities.
A lower arm sticker "WELL'ARS Stiffy Boyz" was added a bit earlier than the previous one, but later was peeled away. On the head "Scarry Guy" (now varnish is stripped off in a place this figure, it was destroyed during damage the reed) and the damage to the reed has been added skull.
The was a rumour that the full sticker was eet fuk sleep ,but james had to chop off sleep to make it fit on the axe. It can be seen on most of the songs from the concert "Live Shit: Seattle" and the concerts promoting the album "...And Justice For All". Used almost exclusively live in the damaged justice tour, so as a result the headstock was broken and repaired many times.
James still uses it for recording purposes (it was in Making Magnetic) but has retired it for stage use since 1990.
Now this guitars was signed by James and rests in the "House of Guitars" (641 Titus Ave Rocester, NY, where the band recorded the album "Kill 'Em All", and currently exhibited at the 30 - anniversary of the band), but when recording the album "Death Magnetic" was used to record the solo in the song "Suicide & Redemption". 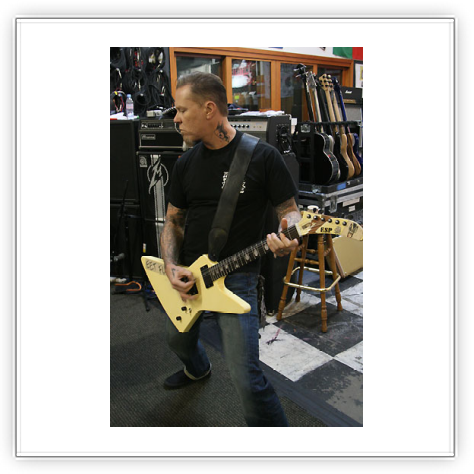 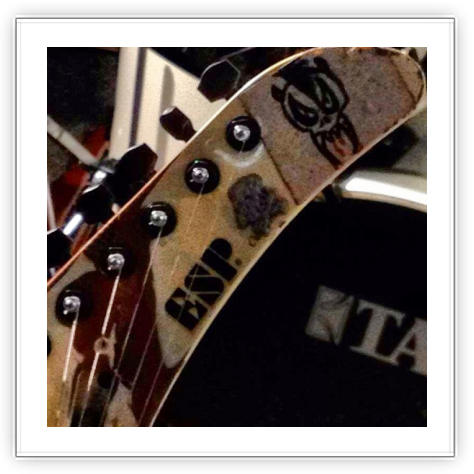 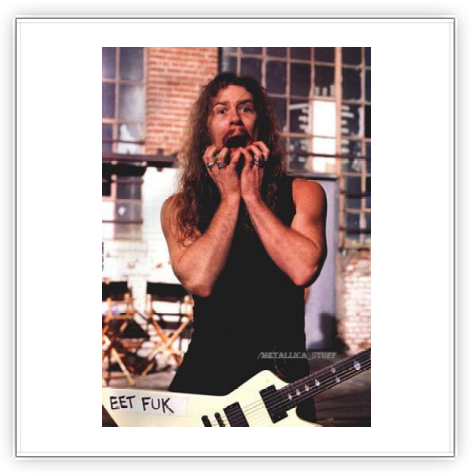 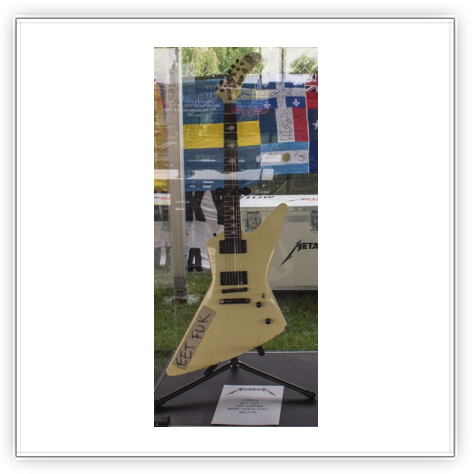 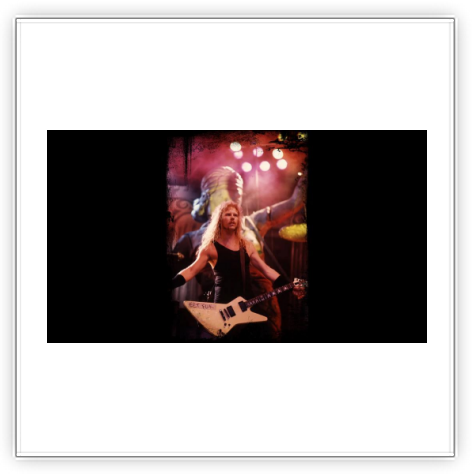 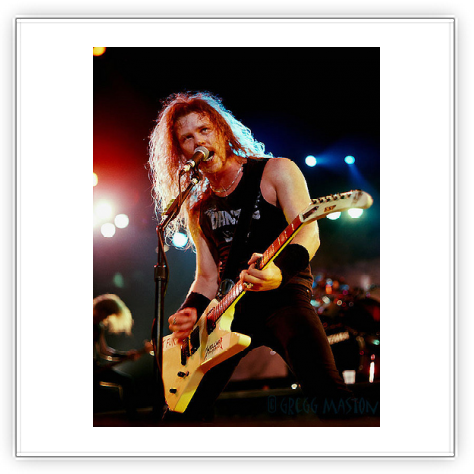 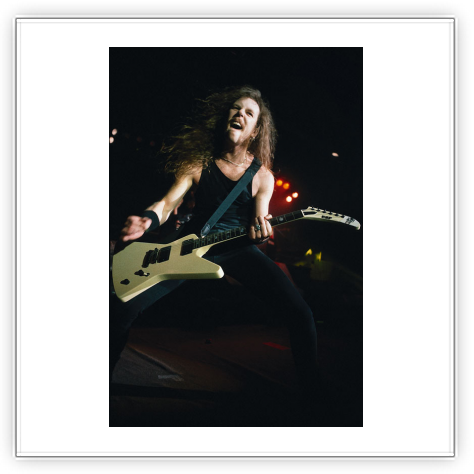 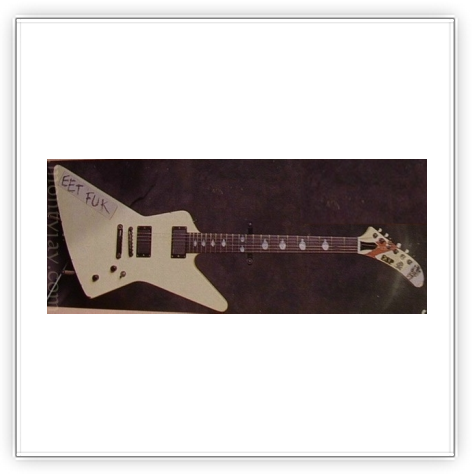 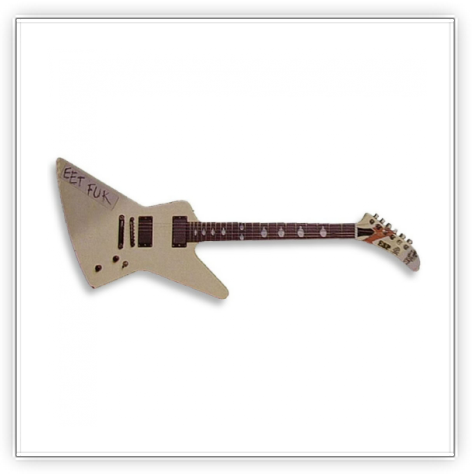 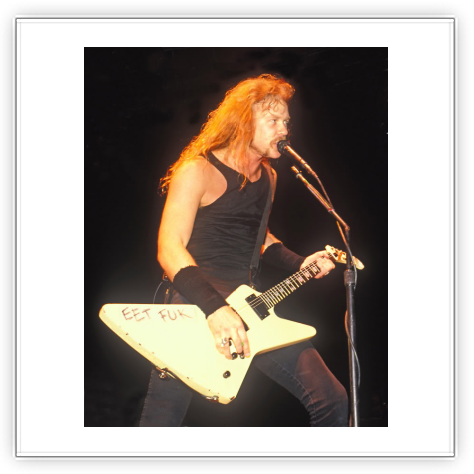 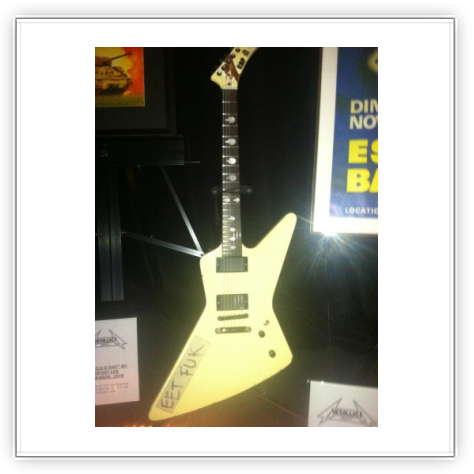 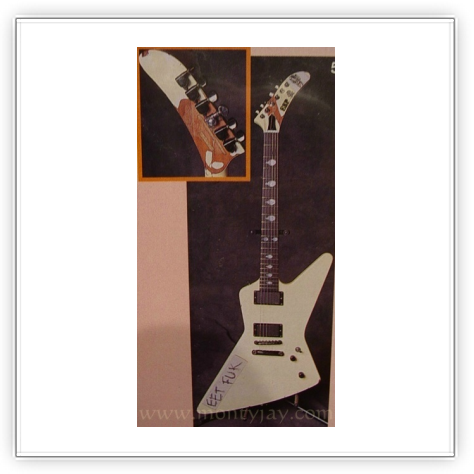 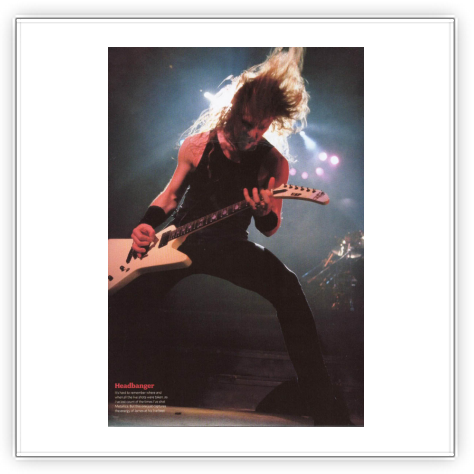 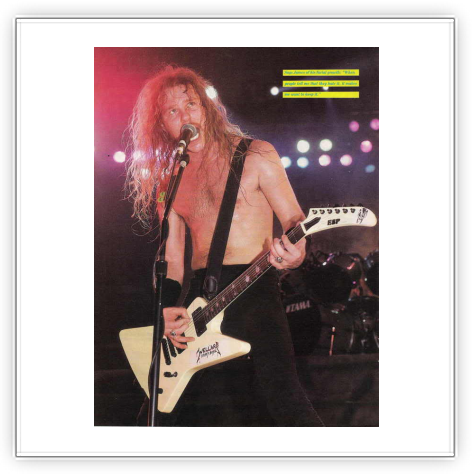 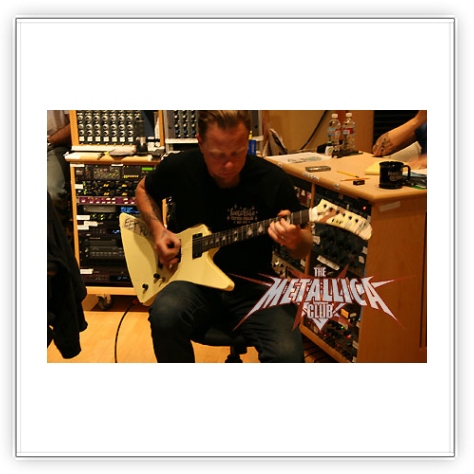 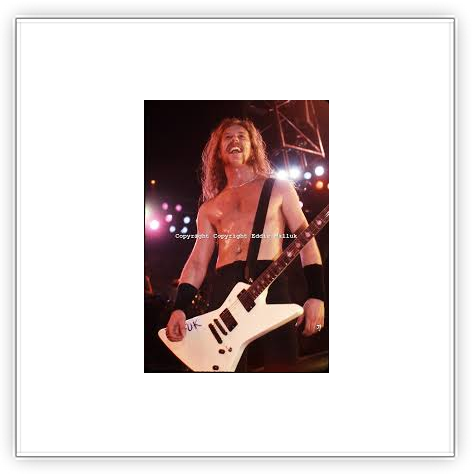 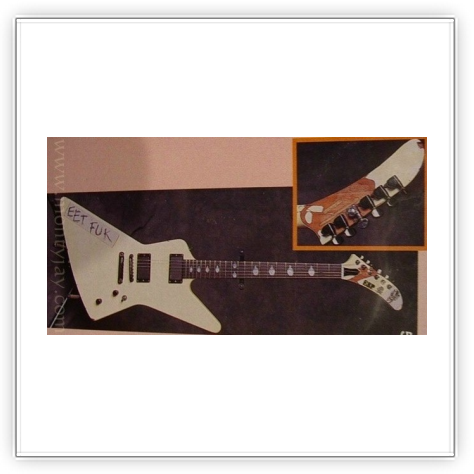 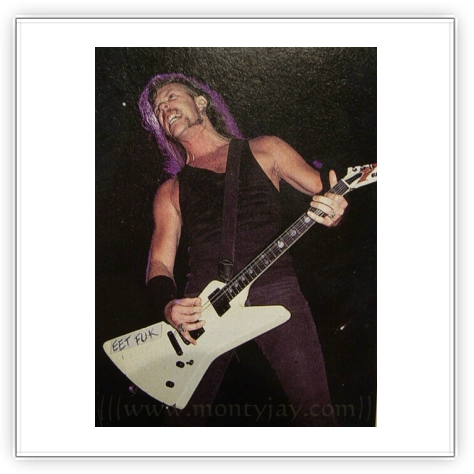 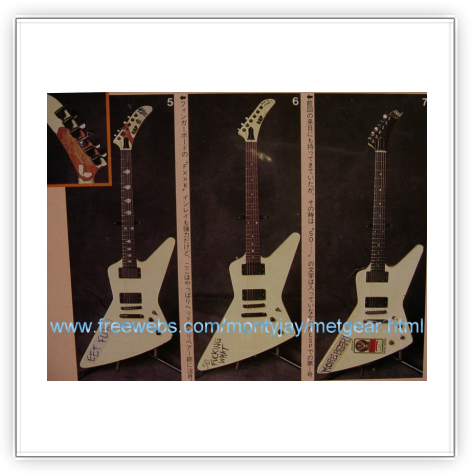 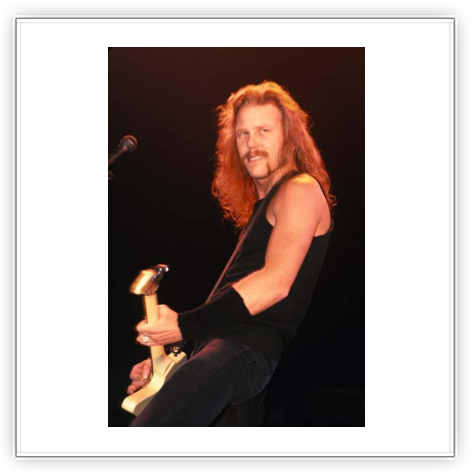 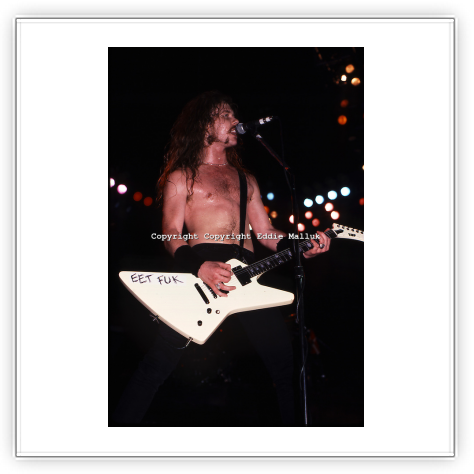 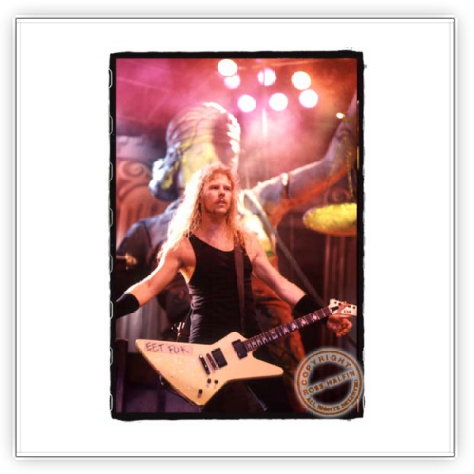 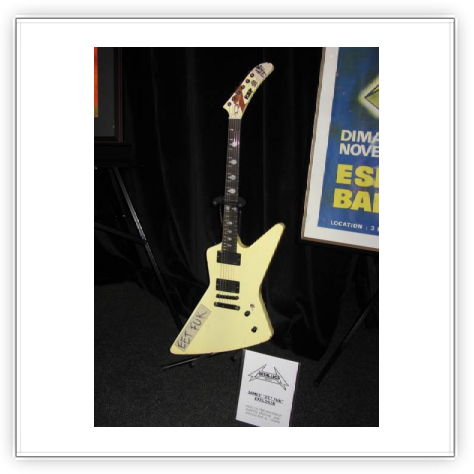 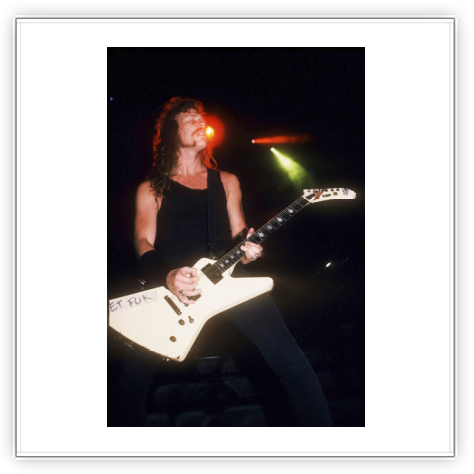 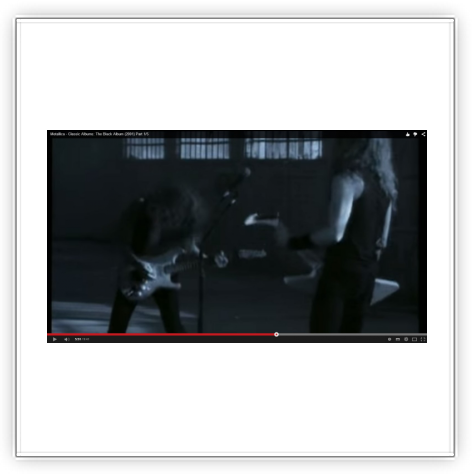 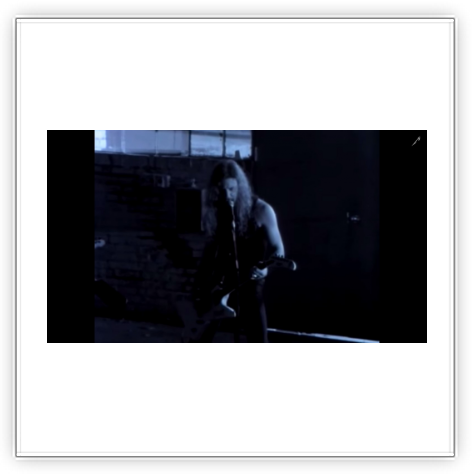