The 1963 Corvette Sting Ray was offered from late 1995 through 1997 through Gibson’s Custom Shop.
They were limited to a production run of 150 instruments.
The original schedule was 150 guitars, but only 40 were ever built!

Each guitar was created specifically to commemorate the outstanding design innovations and the tremendous impact that both General Motor’s Chevrolet and Gibson Guitars have had on American history. Produced exclusively in Nashville, Tennesee by the master luthiers of the Gibson Custom, Art & Historic Division, The SG 1963 “Sting Ray” Corvette model guitar is to be a lasting and treasured investment for years to come. Notice the intricate Mother of Pearl on the neck and the logo on the headstock. The Chrome split rear windows, as pick guards and the Chrome valve cover over the pickup! The Case is finished in the same Leather that was used in all the 1963 models. How about the original Corvette Sting Ray emblem on the front of the case!
This guitar comes complete with A Hand Signed Lithograph of the Original Concept Drawing. Signed by the designer, Larry Shinoda dated 2-22-60.
Comes with Certificate of Authenticity from GIBSON CUSTOM, ART & HISTORIC DIVISION!
This Rare Collectable RETAILED for $7,500.00 in 1994!

The Gibson SG sets the standard and shattered all perceptions of what a guitar "could be" when it was first introduced in 1961.
So what sets this '96 "limited edition" Gibson SG apart from its predecessors?
In 1996 two classic symbols of the American-Spirit were brought together by Gibson's Custom Shop & GM's Corvette Division to pay homage to the '63 Chevy 'Vette.
The Gibson "Corvette" was offered as a limited-edition model, only 100 were produced.
The Sting Ray SG body was carved to simulate the legendary '63 Vette split rear window. It came stock with inlaid windows, a chrome-plated pick-up cover (replicating the '63 Chevy valve-cover) and inlaid Corvette logos. True to its namesake, authentic 1963 "Tuxedo Black" paint, from the GM plant, finishes this "hot-rod".
Gibson's SG Model is one of the best-selling guitars of all time.

From Gibson's 1997 website: "1963... On highways and city streets, the sleek, streamlined shape of the new Corvette Sting Ray captured the imagination of America's automobile lovers. On concert stages, the sharp, bold horns of the Gibson SG pointed the way to the future for America's music makers. 1996... Two classic symbols of the American spirit are brought together by Gibson's Art & Historic division and General Motors Chevrolet Corvette Division. The 1963 Corvette Guitar features an SG body carved to simulate the split rear window of the '63 Sting Ray, complete with inlaid "windows." The chrome-plated pickup cover is engraved to emulate the look of the Corvette's valve covers. The guitar is finished in these authentic 1963 Sting Ray colors: "Riverside Red," "Tuxedo Black," "Sateen Silver" and "Ermine White." The 1963 Corvette Guitar; the fastest Gibson you can buy!"

Gibson guitars and Corvettes first came together on a Custom Shop model on the Les Paul '60 Corvette, which was introduced in 1995 and featured authentic colors from 1960 Corvettes. Later that year Gibson Custom commemorated the '63 Corvette Sting Ray on an SG-style guitar, with the top of the guitar fashioned like the split rear window design o the car. 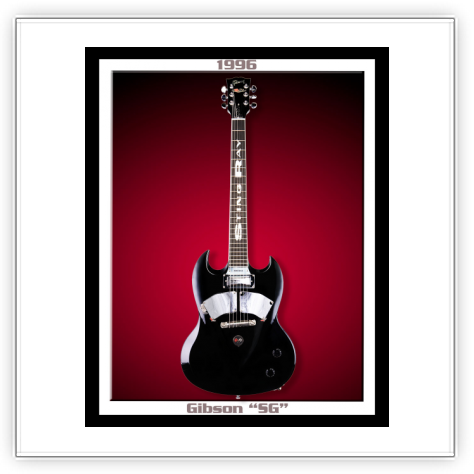 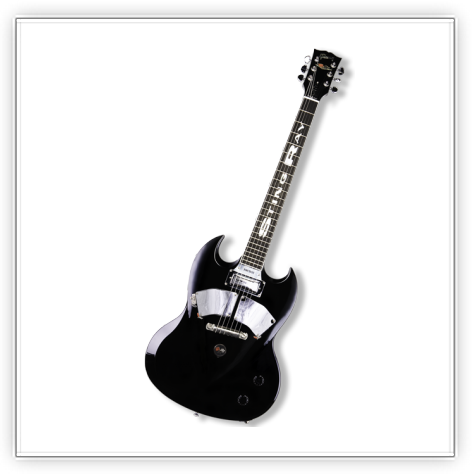 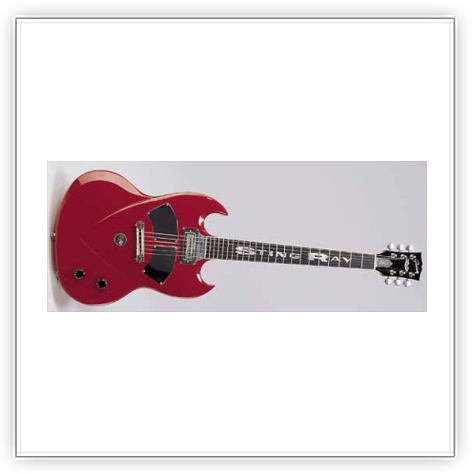 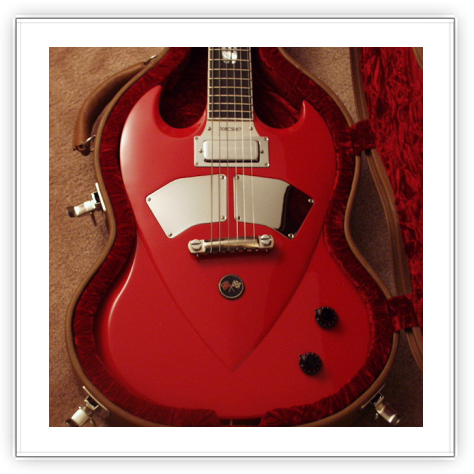 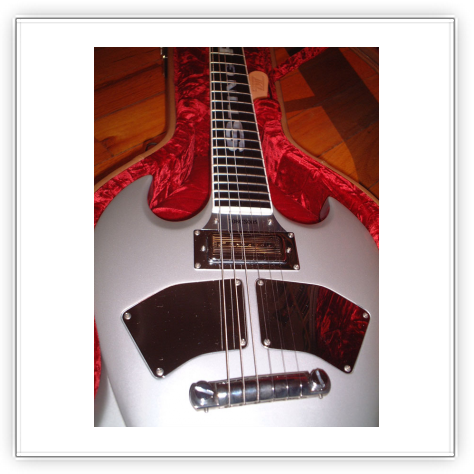 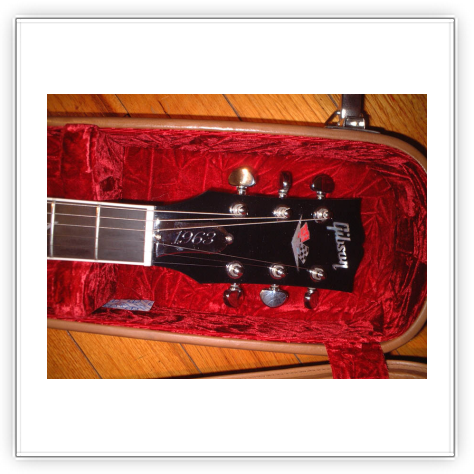 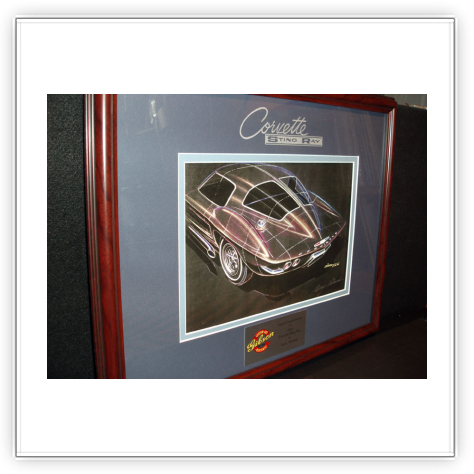 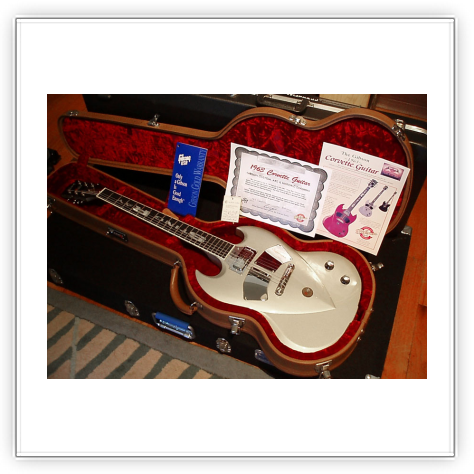 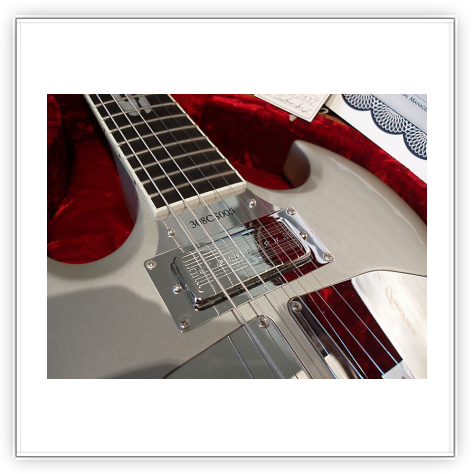 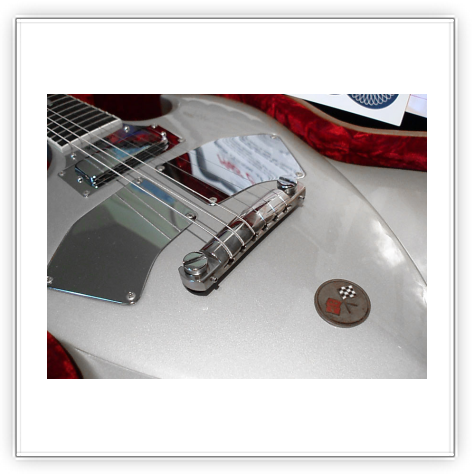 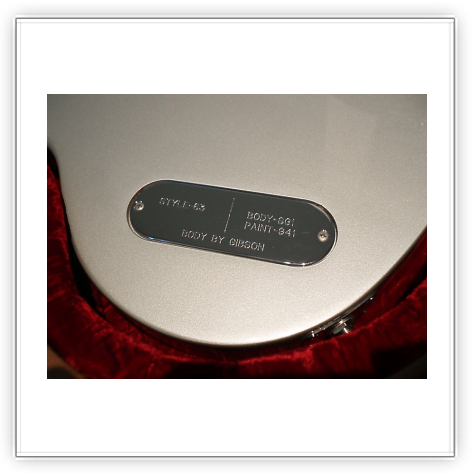 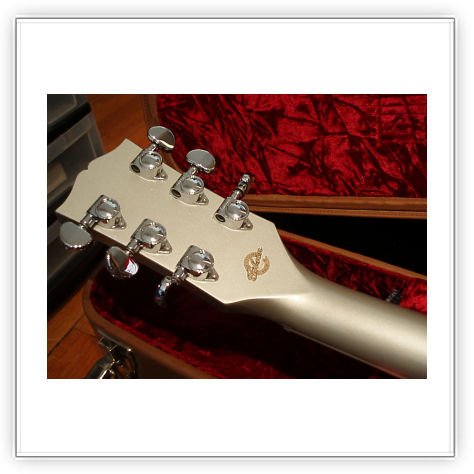 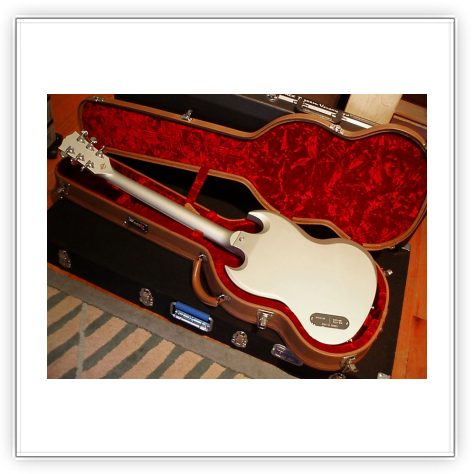 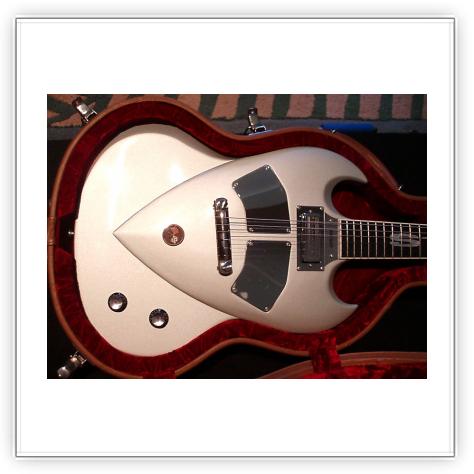 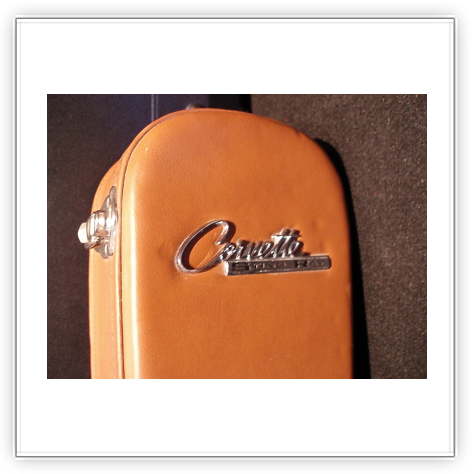